With a privilege account, you could earn 1.00$ Privilege
Out of stock Privilege

Composition :
1 cent : 98% copper, 0.5% tin et 1.5% zinc
5 cents : Nickel
10 cents : Nickel
25 cents : Nickel
50 cents : Nickel
1 dollar : Nickel
1973 Custom Set - Small Bust
The "custom" set contains one coin of each denomination, with an extra cent to show the observe in a vinyl-covered case.
The finish of the coins is identical to the corresponding year of brilliant uncirculated (BU). However, since the coins are not protected in this case,it is possible that people have manipulated the coins or the coins can be toned.
This set is also name Specimen Double Penny Set.
The special reverse on the 1973 25-cent piece commemorates the centennial of the founding of the North West Mounted Police, with later became the Royal Canadian Mounted Police. A new observe with a small, more detailed portrait and fewer rim beads placed farther from the rim was prepared for use with the commemorative reverse. However, asmall quantity of coins was struck with the 1972 observe, creating two varieties for the year : the Small Bust and the Large Bust. The quantity of the Large Bust variety struck for circulation is believed not to exceed 10,000 coins.
This set is part of the "Custom" set which have been released between 1971 and 1980.
Also available :
- 1973 Custom set - Large Bust 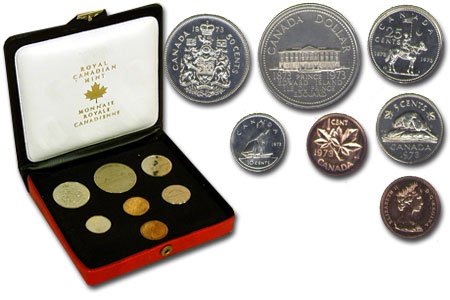